To promote this objective, not only we distribute and market our  Cardiovascular range of products globally through our distribution channels but we also undertake ‘contract manufacturing’& ‘formulation development ’of our wide range of generic products such as Bio Car 80 which contains Telmisartan BP …80 mg. 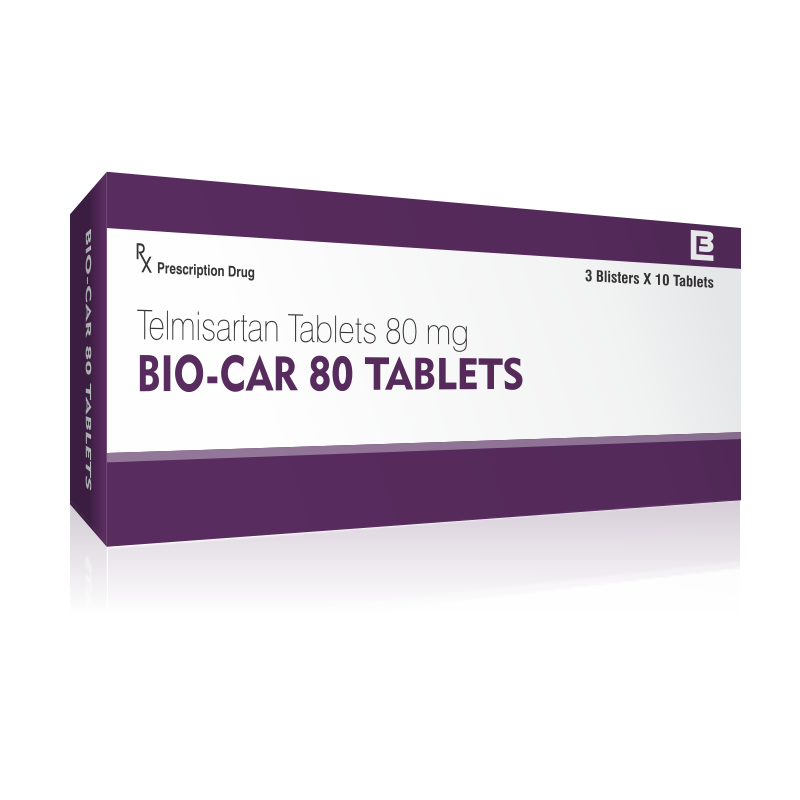 In human, an 80 mg dose of telmisartan almost completely inhibits the angiotensin II evoked blood pressure increase. The inhibitory effect is maintained over 24 hours and still measurable up to 48 hours.

The small reduction in AUC is not expected to cause a reduction in the therapeutic efficacy. There is no linear relationship between doses and plasma levels. Cmax and to a lesser extent AUC increase disproportionately at doses above 40 mg.

Telmisartan is metabolised by conjugation to the glucuronide of the parent compound. No pharmacological activity has been shown for the conjugate.

Telmisartan is characterised by biexponential decay pharmacokinetics with a terminal elimination half-life of >20 hours. The maximum plasma concentration (Cmax) and, to a smaller extent, the area under the plasma concentration-time curve (AUC), increase disproportionately with dose. There is no evidence of clinically relevant accumulation of telmisartan taken at the recommended dose. Plasma concentrations were higher in females than in males, without relevant influence on efficacy.

Treatment of essential hypertension in adults.

Reduction of cardiovascular morbidity in patients with:

The usually effective dose is 40 mg once daily. Some patients may already benefit at a daily dose of 20 mg. In cases where the target blood pressure is not achieved, the dose of telmisartan can be increased to a maximum of 80 mg once daily. Alternatively, telmisartan may be used in combination with thiazide-type diuretics such as hydrochlorothiazide, which has been shown to have an additive blood pressure lowering effect with telmisartan. When considering raising the dose, it must be borne in mind that the maximum antihypertensive effect is generally attained four to eight weeks after the start of treatment.

The recommended dose is 80 mg once daily. It is not known whether doses lower than 80 mg of telmisartan are effective in reducing cardiovascular morbidity.

When initiating telmisartan therapy for the reduction of cardiovascular morbidity, close monitoring of blood pressure is recommended, and if appropriate adjustment of medications that lower blood pressure may be necessary.

Telmisartan may be taken with or without food.

No dose adjustment is necessary for elderly patients.

Telmisartan is not recommended for use in children below 18 years due to a lack of data on safety and efficacy.

SPECIAL WARNING AND PRECAUTIONS FOR USE

There is an increased risk of severe hypotension and renal insufficiency when patients with bilateral renal artery stenosis or stenosis of the artery to a single functioning kidney are treated with medicinal products that affect the renin-angiotensin-aldosterone system.

Other conditions with stimulation of the renin-angiotensin-aldosterone system:

In patients whose vascular tone and renal function depend predominantly on the activity of the renin-angiotensin-aldosterone system (e.g. patients with severe congestive heart failure or underlying renal disease, including renal artery stenosis), treatment with medicinal products that affect this system such as telmisartan has been associated with acute hypotension, hyperazotaemia, oliguria, or rarely acute renal failure .

Patients with primary aldosteronism generally will not respond to antihypertensive medicinal products acting through inhibition of the renin-angiotensin system. Therefore, the use of telmisartan is not recommended.

As with other vasodilators, special caution is indicated in patients suffering from aortic or mitral stenosis, or obstructive hypertrophic cardiomyopathy.

The use of medicinal products that affect the renin-angiotensin-aldosterone system may cause hyperkalemia.

Before considering the concomitant use of medicinal products that affect the renin- angiotensin-aldosterone system, the benefit risk ratio should be evaluated.

The main risk factors for hyperkalaemia to be considered are:

–           Combination with one or more other medicinal products that affect the

immunosuppressives (cyclosporin or tacrolimus), and trimethoprim.

Close monitoring of serum potassium in at risk patients is re

As observed for angiotensin converting enzyme inhibitors, telmisartan and the other angiotensin II receptor antagonists are apparently less effective in lowering blood pressure in black people than in non-blacks, possibly because of higher prevalence of low-renin states in the black hypertensive population.

As with any antihypertensive agent, excessive reduction of blood pressure in patients with ischaemic cardiopathy or ischaemic cardiovascular disease could result in a myocardial infarction or stroke.

USE IN PREGNANCY AND LACTATION

There are no adequate data from the use of Telmisartan in pregnant women. Studies in animals have shown reproductive toxicity.

EFFECTS ON ABILITY TO DRIVE AND OPERATE MACHINE

No studies on the effects on the ability to drive and use machines have been performed. However, when driving vehicles or operating machinery it should be taken into account that dizziness or drowsiness may occasionally occur when taking antihypertensive therapy.

The overall incidence of adverse events reported with telmisartan (41.4 %) was usually comparable to placebo (43.9 %) in controlled trials in patients treated for hypertension. The incidence of adverse events was not dose related and showed no correlation with gender, age or race of the patients. The safety profile of telmisartan in patients treated for the reduction of cardiovascular morbidity was consistent with that obtained in hypertensive patients.

Adverse reactions have been ranked under headings of frequency using the following convention:

Within each frequency grouping, adverse reactions are presented in order of decreasing seriousness.

Not known:   Sepsis including fatal outcome

Blood and the lymphatic system disorders

Inform your doctor in case of any adverse reactions related to drug use.

Please tell your doctor or pharmacist if you are taking or have recently taken any other medicines, including medicines obtained without a prescription: Your doctor may need to change the dose of these other medicines or take other precautions. In some cases you may have to stop taking one of the medicines. This applies especially to the medicines listed below taken at the same time with Telmisartan:

–           Lithium containing medicines to treat some types of depression.

–           Medicines that may increase blood potassium levels such as salt

tacrolimus), and the antibiotic trimethoprim.

–         Diuretics (‘water tablets’), especially if taken in high doses together with

Telmisartan, may lead to excessive loss of body water and low blood

–           As with other blood pressure lowering medicines, the effect of

Telmisartan may be reduced when you take NSAIDs (non steroidal anti-

–        Telmisartan may increase the blood pressure lowering effect of other

There is limited information available with regard to overdose in humans.

Symptoms: The most prominent manifestations of telmisartan overdose were hypotension and tachycardia; bradycardia dizziness, increase in serum creatinine, and acute renal failure have also been reported.

Treatment: Telmisartan is not removed by haemodialysis. The patient should be closely monitored, and the treatment should be symptomatic and supportive. Management depends on the time since ingestion and the severity of the symptoms. Suggested measures include induction of emesis and/or gastric lavage. Activated charcoal may be useful in the treatment of overdosage. Serum electrolytes and creatinine should be monitored frequently. If hypotension occurs, the patient should be placed in a supine position, with salt and volume replacement given quickly.

Store at temperature not exceeding 300C in a dry place. Protect from light.

SHELF LIFE: 24 months from the date of manufacture.

PACKING SIZE: Packed in blister of 10 tablets, 3 blisters per box.