To promote this objective, not only we distribute and market our CNS range of products globally through our distribution channels but we also undertake ‘contract manufacturing’& ‘formulation development ’of our wide range of generic products such as Zolminap which contains  Zolmitriptan 5.00% w/v. 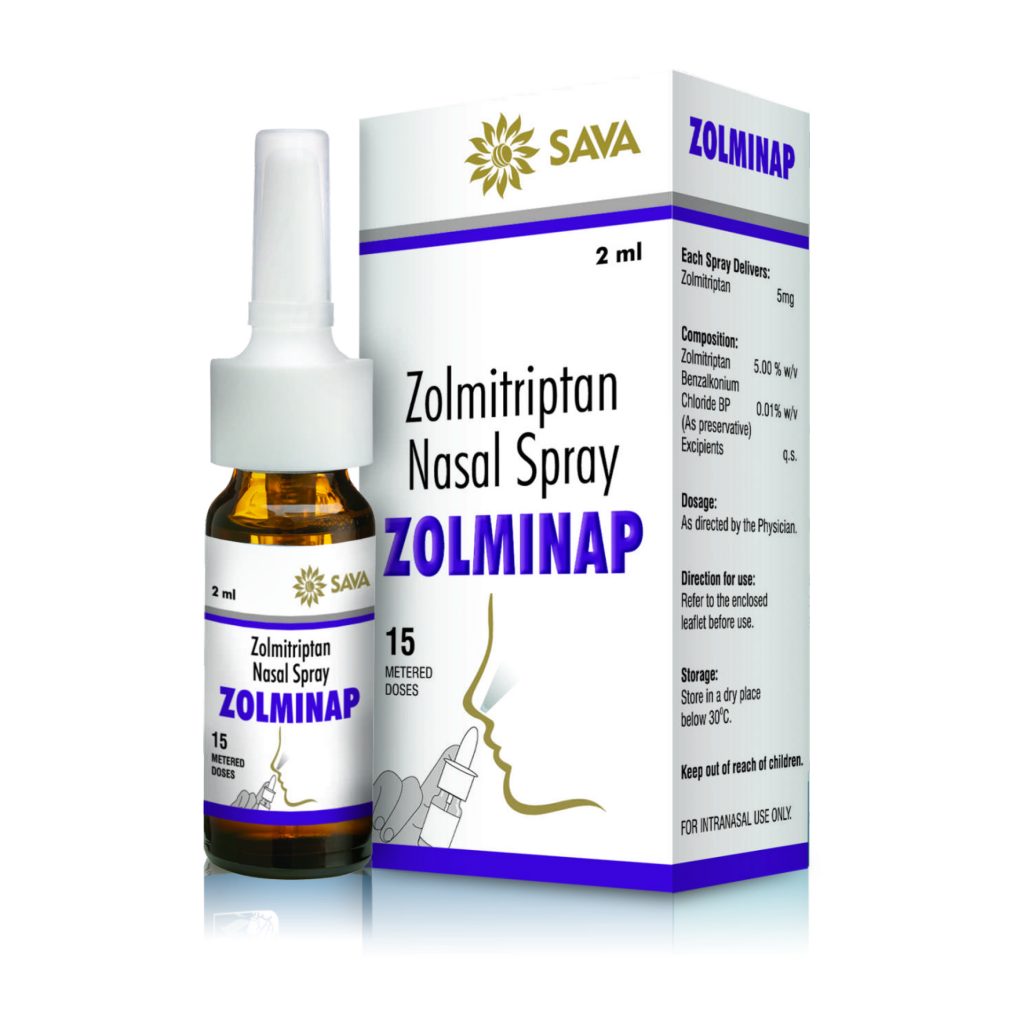 Zolmitriptan binds with high affinity to human recombinant 5-HT1D and 5-HT1B receptors. The therapeutic activity of zolmitriptan for the treatment of migraine headache can most likely be attributed to the agonist effects at the 5-HT1B/1D receptors on intracranial blood vessels (including the arteriovenous anastomoses) and sensory nerves of the trigeminal system which resuft in cranial vessel constriction and inhibition of proinflammatory neuropeptide release.

Plasma protein binding of zolmitriptan is 25% over the concentration range of 10-1000 ng/mL.

Zolmitriptan nasal spray is indicated for the acute treatment of migraine with orwithout aura in adults.

Administer one dose of Zolmitriptan nasal spray 5 mg for the treatment of acute migraine. If the headache returns, the dose may be repeated after 2 hours. The maximum daily dose should not exceed 10 mg in any 24-hour period.

The safety of treating an average of more than four headaches in a 30-day period has not been established.

Patients with moderate to severe hepatic impairment have decreased clearance of zolmitriptan and significant elevation in blood pressure has been reported in some patients. Use of doses less than 2.5mg of an alternate formulation with blood pressure monitoring is recommended.

Zolmitriptan nasal spray should not be given to patients with cerebrovascular syndromes including (but not limited to) stroke of any type as well as transient ischemic attacks.

Zolmitriptan nasal spray should not be given to patients with peripheral vascular disease including (but not limited to) ischemic bowel disease.

Because Zolmitriptan nasal spray may increase blood pressure, it should not be given to patients with uncontrolled hypertension.

Use within 24 hours of treatment with another 5- HT1 agonist, or ergotamine containing medication, or ergot type medication

Zolmitriptan nasal spray should not be administered to patients with hemiplegic or basilar migraine.

Zolmitriptan nasal srpay should only be used where a clear diagnosis of migraine has been established. Risk of Myocardial Ischemia and/or Infarction and Other Adverse Cardiac Events

Serious adverse cardiac events, including acute myocardial infarction, have been reported within a few hours following administration of zolmitriptan.

Because of the potential of this class of compound (5-HT1 agonists) to cause coronary vasospasm, Zolmitriptan nasal spray should not be given to patients with documented ischemic or vasospastic coronary artery disease.

Patients with risk factors for CAD

It is strongly recommended that zolmitriptan not be given to patients in whom unrecognized coronary artery disease (CAD) is predicted by the presence of risk factors unless a cardiovascular evaluation provides satisfactory clinical evidence that the patient is reasonably free of coronary artery and ischemic myocardial disease or other significant underlying cardiovascular disease.

If concomitant treatment with Zolmitriptan nasal spray and an SSRI is clinically warranted, careful observation of the patient is advised, particularly during treatment initiation and dose increases.

Fluoxetine: The pharmacokinetics of zolmitriptan, as well as its effect on blood pressure, were unaffected by 4 weeks of pre-treatment with oral fluoxetine (20 mg/day).

Propranolol: There were no interactive effects on blood pressure or pulse rate following administration of propranolol with zolmitriptan.

Acetaminophen: A single 1 g dose of acetaminophen does not alter the pharmacokinetics of zolmitriptan and its N­desmethyl metabolite.

Metoclopramide: A single 10 mg dose of metoclopramide had no effect on the pharmacokinetics of zolmitriptan or its metabolites.

Cimetidine: Following the administration of cimetidine, the half-life and AUC of a 5 mg dose of zolmitriptan and its active metabolite were approximately doubled

There are no adequate and well controlled studies in pregnant women; therefore, zolmitriptan should be used during pregnancy only if the potential benefit justifies the potential ris kto the fetus.

Although the pharmacokinetic disposition of the drug in the elderly is similar to that seen in younger adutts, there is no information about the safety and effectiveness of zolmitriptan in this patients population overthe age of 65.

Because of the similarity in exposure, zolmitriptan tablets and nasal spray should have similar dosage adjustments and should be administered with

caution in subjects with liver disease, generally using doses less than 2.5 mg. Doses lower than 5 mg can only be achieved through the use of an oral formulation.

Effect to Drive & Use the Machine: Use is unlikely to result in an impairment of the ability of patients to drive or operate machinery. However it should be taken into accountthat somnolence may occur.

There is no specific antidote to zolmitriptan. In cases of severe intoxication, intensive care procedures are recommended, including establishing and maintaining a patent airway, ensuring adequate oxygenation and ventilation, and monitoring and support of the cardiovascular system. It is unknown what effect hemodialysis or peritoneal dialysis has on the plasma concentrations of zolmitriptan.

STORAGE: Store in a dry place below 30°C.