To promote this objective, not only we distribute and market our respiratory range of products globally through our distribution channels but we also undertake ‘contract manufacturing’& ‘formulation development ’of our wide range of generic products such as Tiodora 18 which contains Tiotropium bromide monohydrate..18 mcg. 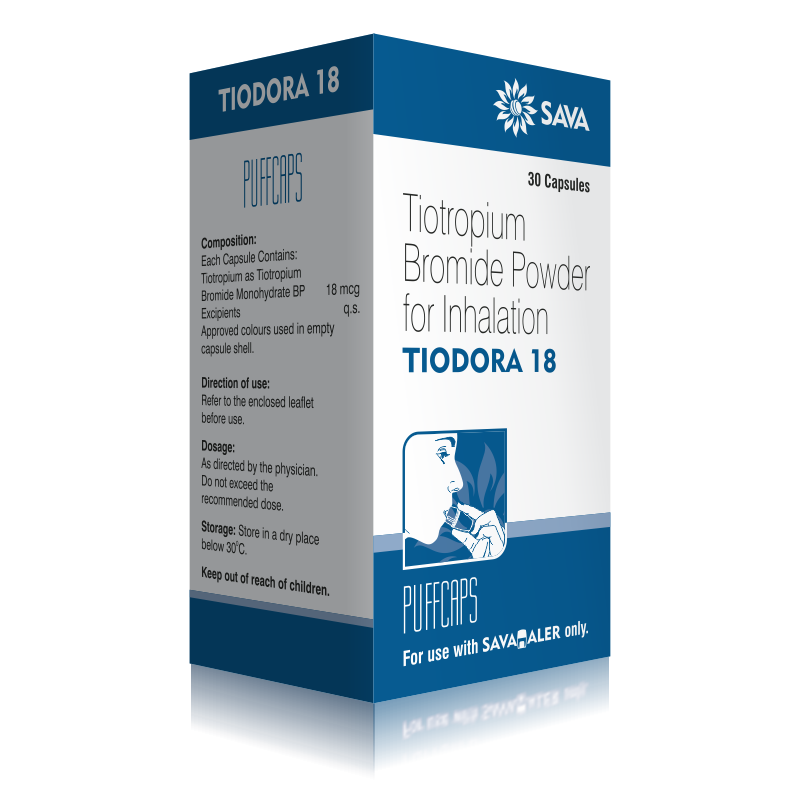 Tiotropium is a long-acting, antimuscarinic agent.

Tiotropium is a long-acting, antimuscarinic agent, which is often referred to as an anticholinergic.  In the airways, it exhibits pharmacological effects through inhibition of M3-receptors at the smooth muscle leading to bronchodilation.

Tiotropium is administered by dry powder inhalation. In common with other inhaled drugs, the majority of the delivered dose is deposited in the gastrointestinal tract and, to a lesser extent, in the lung, the intended organ.

Tiotropium shows a volume of distribution of 32 L/kg indicating that the drug binds extensively to tissues. The drug is bound by 72% to plasma proteins. At steady state, peak tiotropium plasma levels in COPD patients were 17-19 pg/mL when measured 5 minutes after dry powder inhalation of an 18 mcg dose and decreased rapidly in a multi-compartmental manner. Steady state trough plasma concentrations were 3–4 pg/mL. Local concentrations in the lung are not known, but the mode of administration suggests substantially higher concentrations in the lung.

The extent of biotransformation appears to be small. This is evident from a urinary excretion of 74% of unchanged substance after an intravenous dose to young healthy volunteers.

The terminal elimination half-life of tiotropium is between 5 and 6 days following inhalation.

Intravenously administered tiotropium is mainly excreted unchanged in urine (74%). After dry powder inhalation, urinary excretion is 14% of the dose, the remainder being mainly non-absorbed drug in the gut which is eliminated via the feces. The renal clearance of tiotropium exceeds the creatinine clearance, indicating active secretion into the urine. After chronic once-daily inhalation by COPD patients, pharmacokinetic steady state was reached after 2–3 weeks with no accumulation thereafter.

The effects of hepatic impairment on the pharmacokinetics of tiotropium were not studied.

However, hepatic insufficiency is not expected to have relevant influence on tiotropium pharmacokinetics

Tiotropium bromide inhalation powder is contraindicated in patients with a history of hypersensitivity to atropine or its derivatives, including ipratropium, or to any component of this product.

Tiotropium bromide inhalation  powder is intended as a once-daily maintenance treatment for COPD and is not indicated for the initial treatment of acute episodes of bronchospasm, i.e., rescue therapy.

Immediate hypersensitivity reactions, including angioedema, may occur after administration of tiotropium. If such a reaction occurs, therapy with tiotropium should be stopped at once and alternative treatments should be considered.

Inhaled medicines, including tiotropium, may cause paradoxical bronchospasm. If this occurs, treatment with tiotropium should be stopped and other treatments considered.

Tiotropium capsules are for inhalation only and must not be swallowed.

As an anticholinergic drug, tiotropium bromide inhalation powder may potentially worsen symptoms and signs associated with narrow-angle glaucoma, prostatic hyperplasia or bladder-neck obstruction and should be used with caution in patients with any of these conditions.

As a predominantly renally excreted drug, patients with moderate to severe renal impairment (creatinine clearance of £ 50 mL/min) treated with tiotropium should be monitored .

There are no adequate and well-controlled studies in pregnant women. Tiotropium should be used during pregnancy only if the potential benefit justifies the potential risk to the fetus.

Use in Labor and Delivery

The safety and effectiveness of tiotropium has not been studied during labor and delivery.

Tiotropium inhaler is approved for use in the maintenance treatment of bronchospasm associated with chronic obstructive pulmonary disease, including chronic bronchitis and emphysema. This disease does not normally occur in children. The safety and effectiveness of tiotropium in pediatric patients have not been established.

The most commonly adverse drug reaction is dry mouth. It is often mild and resolved during continued treatment. Other reactions which are not common includes constipation, increased heart rate, blurred vision, glaucoma, urinary difficulty, and urinary retention.

The recommended dosage of Tiotropium bromide inhalation powder is the inhalation of the contents of one tiotropium capsule, once-daily, with the inhalation device. No dosage adjustment is required for geriatric, hepatically-impaired, or renally-impaired patients. However, patients with moderate to severe renal impairment given tiotropium should be monitored closely.

30 Capsules in a bottle.