To promote this objective, not only we distribute and market our Cardiovascular  range of products globally through our distribution channels but we also undertake ‘contract manufacturing’& ‘formulation development ’of our wide range of generic products such as Rozatin-20 which contains  Rosuvastatin Calcium Equivalent to Rosuvastatin 2 0 mg.

This Rozatin 20 contains same active ingredient as Crestor from AstraZeneca. 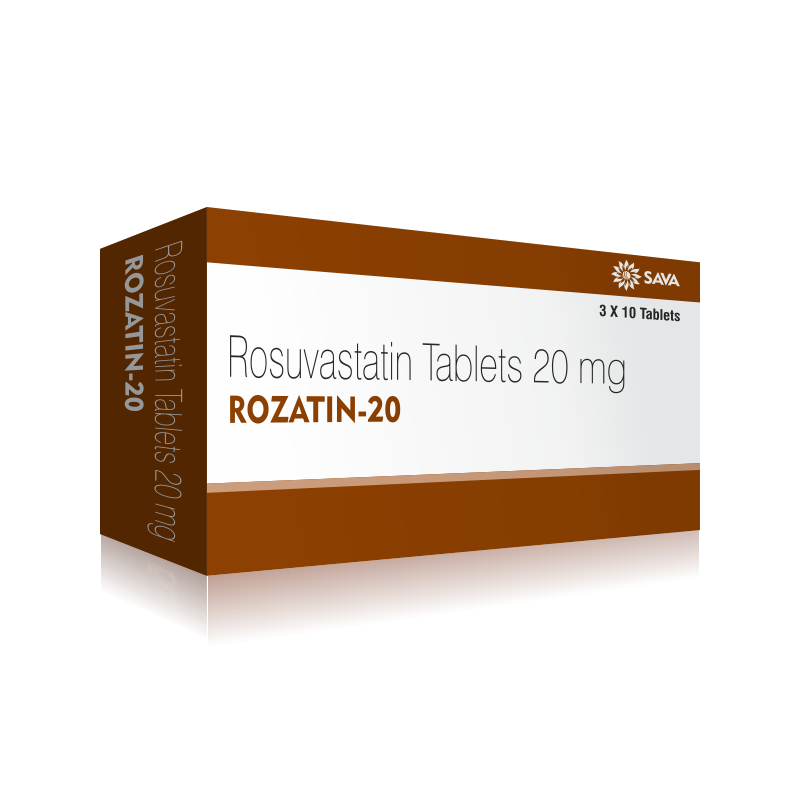 Category: Rosuvastatin; belongs to the class of HMG- reductase inhibitors. Used in the treatment of hyperlipidemia.

ROZATIN-20 Light Pink colour Film-Coated oval shape Tablet “20” engraved on one side & break line on another side.

Rosuvastatin is a selective and competitive inhibitor of HMG-CoA reductase, the rate-limiting enzyme that converts 3-hydroxy-3-methylglutaryl coenzyme A to mevalonate, a precursor for cholesterol. The primary site of action of rosuvastatin is the liver, the target organ for cholesterol lowering. Rosuvastatin increases the number of hepatic LDL receptors on the cellsurface, enhancing uptake and catabolism of LDL and it inhibits the hepatic synthesis of VLDL, thereby reducing the total number of VLDL and LDL particles.

Before treatment initiation the patient should be placed on a standard cholesterol-lowering diet that should continue during treatment. The dose should be individualized according to the goal of therapy and patient response, using current consensus guidelines. Rosuvastatin may be given at any time of day, with or without food.

The recommended start dose is 5 mg or 10 mg orally once daily in both statinnaïve or patients switched from another HMG-CoA reductase inhibitor. The choice of start dose should take into account the individual patient’s cholesterol level and future cardiovascular risk as well as the potential risk for adverse reactions. A dose adjustment to the next dose level can be made after 4 weeks, if necessary. In light of the increased reporting rate of adverse reactions with the 40 mg dose compared to lower doses, a final titration to the maximum dose of 40 mg should only be considered in patients with severe hypercholesterolaemia at high cardiovascular risk (in particular those with familial hypercholesterolaemia), who do not achieve their treatment goal on20 mg, and in whom routine follow-up will be performed. Specialist supervision is recommended when the 40 mg dose is initiated.

In the cardiovascular events risk reduction study, the dose used was 20 mg daily.

Paediatric use should only be carried out by specialists. Children and adolescents 10 to 17 years of age (boys Tanner Stage II and above, and girls who are at least 1 year post-menarche) In children and adolescents with heterozygous familial hypercholesterolaemia the usual start dose is 5 mg daily. The usual dose range is 5-20 mg orally once daily. Titration should be conducted according to the individual response and tolerability in paediatric patients, as recommended by the paediatric treatment recommendations. Children and adolescents should be placed on standard cholesterol-lowering diet before Rosuvastatin treatment initiation; this diet should be continued during Rosuvastatin treatment. Safety and efficacy of doses greater than 20 mg have not been studied in this population. The 40 mg tablet is not suitable for use in paediatric patients.

Use in the elderly

A start dose of 5 mg is recommended in patients >70 years. No other dose adjustment is necessary in relation to age.

Dosage in patients with renal insufficiency

Dosage in patients with hepatic impairment

Rosuvastatin is contraindicated in patients with active liver disease.

Increased systemic exposure has been seen in Asian subjects. The recommended start dose is 5 mg for patients of Asian ancestry. The 40 mg dose is contraindicated in these patients.

Dosage in patients with pre-disposing factors to myopathy

The recommended start dose is 5 mg in patients with predisposing factors to myopathy. The 40 mg dose is contraindicated in some of these patients.

In patients with myopathy.

In patients receiving concomitant ciclosporin. During pregnancy and lactation and in women of child bearing potential not using appropriate contraceptive measures. The 40 mg dose is contraindicated in patients with pre-disposing factors for myopathy/rhabdomyolysis. Such factors include: Moderate renal impairment (creatinine clearance < 60 ml/min)

Personal or family history of hereditary muscular disorders Previous history of muscular toxicity with another HMG-CoA reductase inhibitor or fibrate Alcohol abuse Situations where an increase in plasma levels may occurAsian patients Concomitant use of fibrates.

Reported study showed that proteinuria, detected by dipstick testing and mostly tubular in origin, has been observed in patients treated with higher doses of Rosuvastatin, in particular 40 mg, where it was transient or intermittent in most cases. Proteinuria has not been shown to be predictive of acute or progressive renal disease.

Effects on skeletal muscle e.g. myalgia, myopathy and rarely, rhabdomyolysis have been reported in Rosuvastatin-treated patients with all doses and in particular with doses > 20 mg. Very rare cases of rhabdomyolysis have been reported with the use of ezetimibe in combination with HMG-CoA reductase inhibitors. A pharmacodynamic interaction cannot be excluded and caution should be exercised with their combined use.

Creatine Kinase (CK) should not be measured following strenuous exercise or in the presence of a plausible alternative cause of CK increase which may confound interpretation of the result. If CK levels are significantly elevated at baseline (>5xULN) a confirmatory test should be carried out within 5–7 days. If the repeat test confirms a baseline CK>5xULN, treatment should notbe started. Before Treatment Rosuvastatin, as with other HMG-CoA reductase inhibitors, should be prescribed with caution in patients with pre-disposing factors for myopathy/rhabdomyolysis. Such factors include:

• Situations where an increase in plasma levels may occur.

• Concomitant use of fibrates.

In such patients the risk of treatment should be considered in relation to possible benefit and clinical monitoring is recommended. If CK levels are significantly elevated at baseline (>5xULN) treatment should not be started. While on Treatment Patients should be asked to report inexplicable muscle pain, weakness or cramps immediately, particularly if associated with malaise or fever. CK levels should be measured in these patients. Therapy should be discontinued if CK levels are markedly elevated (>5xULN) or if muscular symptoms are severe and cause daily discomfort (even if CK levels are 5x ULN). If symptoms resolve and CK levels return to normal, then consideration should be given to re-introducing Rosuvastatin or an alternative HMG-CoA reductase inhibitor at the lowest dose with close monitoring. Routine monitoring of CK levels in asymptomatic patients is not warranted. Rosuvastatin should not be used in any patient with an acute, serious condition suggestive of myopathy or predisposing to the development of renal failure secondary to rhabdomyolysis (e.g. sepsis, hypotension, major surgery, trauma, severe metabolic, endocrine and electrolyte disorders; or uncontrolled seizures).

As with other HMG-CoA reductase inhibitors, Rosuvastatin should be used with caution in patients who consume excessive quantities of alcohol and/or have a history of liver disease. It is recommended that liver function tests be carried out prior to, and 3 months following, the initiation of treatment. Rosuvastatin should be discontinued or the dose reduced if the level of serum transaminases is greater than 3 times the upper limit of normal. The reporting rate for serious hepatic events (consisting mainly of increased hepatic transaminases) in

post-marketing use is higher at the 40 mg dose. In patients with secondary hypercholesterolaemia caused by hypothyroidism or nephrotic syndrome, the underlying disease should be treated prior to initiating therapy with Rosuvastatin.

Pharmacokinetic studies show an increase in exposure in Asian subjects compared with Caucasians.

Patients with rare hereditary problems of galactose intolerance, the Lapp lactase deficiency or glucose-galactose malabsorption should not take this medicine.

Exceptional cases of interstitial lung disease have been reported with some statins, especially with long term therapy. Presenting features can include dyspnoea, non-productive cough and deterioration in general health (fatigue, weight loss and fever). If it is suspected a patient has developed interstitial lung disease, statin therapy should be discontinued.

In patients with fasting glucose 5.6 to 6.9 mmol/L, treatment with rosuvastatin has been associated with an increased risk of diabetes mellitus.

The evaluation of linear growth (height), weight, BMI (body mass index), and secondary characteristics of sexual maturation by Tanner staging in paediatric patients 10 to 17 years of age taking Rosuvastatin is limited to a one-year period.

Ciclosporin: During concomitant treatment with Rosuvastatin and ciclosporin, Rosuvastatin AUC values were on average 7 times higher than those observed in healthy volunteers Concomitant administration did not affect plasma concentrations of ciclosporin.

Vitamin K antagonists: As with other HMG-CoA reductase inhibitors, the initiation of treatment or dosage up-titration of Rosuvastatin in patients treated concomitantly with vitamin K antagonists (e.g. warfarin or another coumarin anticoagulant) may result in an increase in International

Normalised Ratio (INR). Discontinuation or down-titration of Rosuvastatin may result in a decrease in INR. In such situations, appropriate monitoring of INR is desirable.

Rosuvastatin exposure. Reported data showed that concomitant use of Rosuvastatin in HIV patients receiving protease inhibitors is not recommended.

Antacid: The simultaneous dosing of Rosuvastatin with an antacid suspension containing aluminium and magnesium hydroxide resulted in a decrease in Rosuvastatin plasma concentration of approximately 50%. This effect was mitigated when the antacid was dosed 2 hours after Rosuvastatin.

Oral contraceptive/hormone replacement therapy (HRT): Concomitantuse of Rosuvastatin and an oral contraceptive resulted in an increase in ethinyl estradiol and norgestrel AUC of 26% and 34%, respectively. These increased plasma levels should be considered when selecting oral

Cytochrome P450 enzymes: Reported in vitro and in vivo studies showed that Rosuvastatin is neither an inhibitor nor an inducer of cytochrome P450 isoenzymes.

Rosuvastatin is contraindicated in pregnancy and lactation. Women of child bearing potential should use appropriate contraceptive measures. Animal studies provide limited evidence of reproductive toxicity. Ifa patient becomes pregnant during use of this product, treatment should be discontinued immediately. Rosuvastatin is excreted in the milk of rats. There are no data with respect to excretion in milk in humans.

Effect to Drive and use the machine:

Studies to determine the effect of Rosuvastatin on the ability to drive and use machines have not been conducted. However, based on its pharmacodynamic properties, Rosuvastatin is unlikely to affect this ability. When driving vehicles or operating machines, it should be taken into account that dizziness may occur during treatment.

Storage: Store in a dry place below 30°C. Protect from light.