To promote this objective, not only we distribute and market our respiratory range of products globally through our distribution channels but we also undertake ‘contract manufacturing’& ‘formulation development ’of our wide range of generic products such as Formezon 12 which contains  Formoterol Fumarate Dihydrate BP Equivalent to Formoterol Fumarate 12 mcg 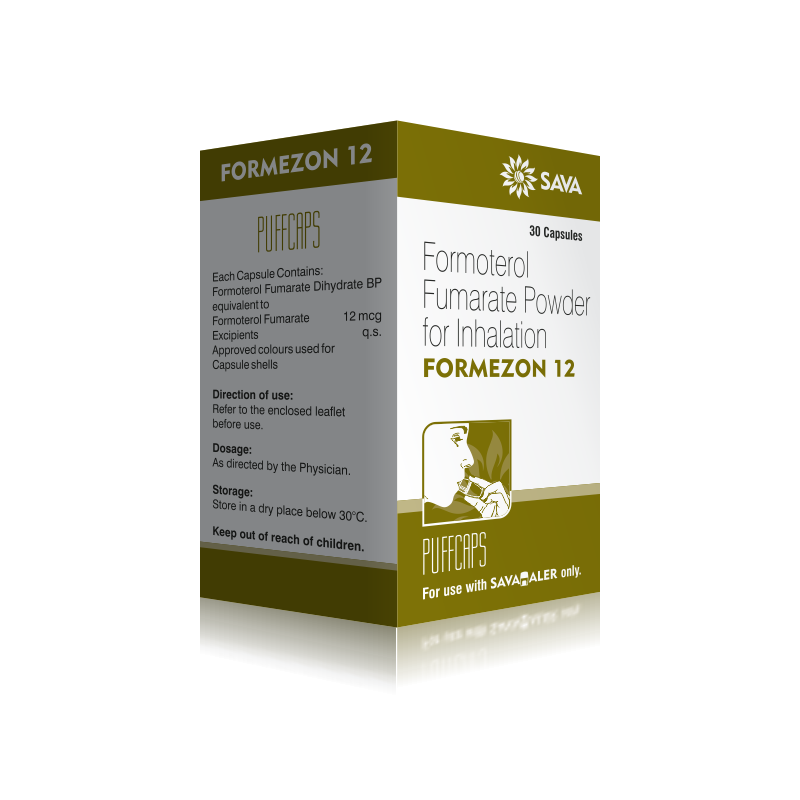 The pharmacologic effects of beta2-adrenoceptor agonist drugs, including formoterol, are at least in part attributable to stimulation of intracellular adenyl cyclase, the enzyme that catalyzes the conversion of adenosine triphosphate (ATP) to cyclic-3′, 5′-adenosine monophosphate (cyclic AMP). Increased cyclic AMP levels cause relaxation of bronchial smooth muscle and inhibition of release of mediators of immediate hypersensitivity from cells, especially from mast cells.

Gender: After correction for body weight, formoterol pharmacokinetics did not differ significantly between males and females.

Geriatric and Pediatric: The pharmacokinetics of formoterol have not been studied in the elderly population, and limited data are available in pediatric patients.

For long-term, maintenance treatment: Twice daily administration (morning and evening) in the of asthma remove  in patients 12 years of age and older with reversible, obstructive airways disease, including patients with symptoms of nocturnal asthma, who are using optimal corticosteroid treatment and experiencing regular or frequent breakthrough symptoms requiring regular use of a short-acting bronchodilator.

Formoterol should not be used in patients whose asthma can be managed by occasional use of short-acting, inhaled b2-agonists.

Corticosteroids should not be stopped because formoterol is prescribed.

Formoterol is a long-acting b2-agonist and should not be used as a rescue medication. To relieve acute asthmatic symptoms a short-acting, inhaled bronchodilator (e.g., terbutaline or salbutamol) should be used.

In patients with persistent asthma, use of FORMEZON INHALER for the prevention of exercise induced bronchospasm may be clinically indicated, but the treatment of asthma should include a long-term asthma control medication, such as an inhaled corticosteroid

FORMEZON is indicated for the long-term, twice daily administration (morning and evening) in the maintenance treatment of bron-choconstriction in patients with Chronic Obstructive Pulmonary Diseases including chronic bronchitis and emphysema.

Because of the risk of asthma-related death and hospitalization, use of Formoterol for the treatment of asthma without concomitant use of a long-term asthma control medication, such as an inhaled corticosteroid, is contraindicated.

Formoterol should not be initiated or increased in patients with significantly worsening or acutely deteriorating asthma.

Use of Anti-inflammatory Agents:

Corticosteroids should not be stopped when formoterol is initiated. Patients must be advised not to stop or reduce corticosteroid therapy without medical advice.

Formoterol should not be used to treat acute symptoms

Formoterol and the Management of Asthma:

• Oral or inhaled corticosteroids should not be stopped.

• Sudden or progressive deterioration in asthma control is potentially life-threatening; the treatment plan must be re-evaluated, and consideration be given to increasing corticosteroid therapy

Potentially serious ECG changes (such as increased QTc interval) and hypokalemia may result from b2-agonist therapy. Although clinically not significant, a small increase in QTc interval and/or decrease in serum potassium has been reported at therapeutic doses of formoterol. Particular caution is advised in severe asthma as these effects may be potentiated by hypoxia and concomitant treatment with xanthine derivatives, steroids and diuretics. Hypokalemia will increase the susceptibility of digitalis patients to cardiac arrhythmias (see Precautions).

It is recommended that serum potassium levels be monitored in such situations. Therefore, formoterol, like all sympathomimetic amines, should be used with caution in patients with cardiovascular disorders, arrhythmias and hypertension.

Sympathomimetic bronchodilators should be administered cautiously to patients who are unusually responsive to sympathomimetic amines, e.g., in patients with hyperthyroidism not yet under adequate control.

Since b2-agonists may increase the blood glucose level, additional blood glucose controls are recommended when asthmatic patients with concomitant diabetes are started on formoterol.

Paradoxical Bronchospasm: As with other inhaled asthma medication, the potential for paradoxical bronchospasm should be kept in mind. If it occurs, treatment with formoterol should be discontinued immediately and alternative therapy instituted.

Do not introduce formoterol as a treatment for acutely deteriorating asthma.

Formoterol is intended for the maintenance treatment of asthma and should not be introduced or increased in acutely deteriorating asthma, which is a potentially life-threatening condition.

Do not use formoterol to treat acute symptoms.

Although formoterol has a rapid onset of action (1 to 3 minutes), current asthma management guidelines recommend that long-acting, inhaled bronchodilators should be used only as twice-daily maintenance bronchodilator therapy.

Do not exceed recommended dosage. Formoterol should not be used more frequently than twice daily or at higher doses than recommended. Fatalities have been reported in association with excessive use of inhaled sympathomimetic drugs.

Cardiovascular and Other Medical Conditions:

Special care and supervision, with particular emphasis on dosage limits, is required in patients receiving formoterol when the following conditions may exist:

• Use with caution in patients with idiopathic hypertrophic subvalvular aortic stenosis, in whom an increase in the pressure gradient between the left ventricle and the aorta may occur, causing increased strain on the left ventricle.

Due to the reversible hyperglycemic effect of b2-agonists, additional blood glucose monitoring is recommended initially in diabetic patients.

The safety of formoterol during pregnancy has not yet been established.

Formoterol was found to be excreted in the milk of lactating rats after oral administration. Since there is no experience in the use of formoterol in nursing mothers, its use in such circumstances should only be considered if the expected benefit to the mother is greater than the risk to the infant.

There are no well-controlled human studies that have investigated the effects of formoterol on preterm labor or labor at term. Because of the potential for b-agonist interference with uterine contractibility, use of b2-agonists, such as formoterol during labor should be restricted to those patients in whom the benefits clearly outweigh the risks.

No adjustment of dose should be required in the elderly, or in patients with renal or hepatic impairment, at the recommended normal doses.

Formoterol is not currently recommended for use in children younger than 12 years of age due to limited clinical data in this age group.

The recommended dosage, as follows:

Adults: The usual dose is 6 or 12 µg, twice daily, at 12-hour intervals. Some adults may need 24 µg, twice daily. The maximum daily dosage for adults, 48 µg, should not be exceeded.

Adolescent Children (12 to 16 years): The usual dose is 6 µg, twice daily, at 12-hour intervals. Some children may need 12 µg, twice daily. The maximum daily dosage for adolescent children, 24 µg, should not be exceeded.

Formoterol is not meant to relieve acute asthma symptoms and extra doses should not be used for that purpose. In patients receiving formoterol for oral inhalation, other inhaled medications should be used only as directed by the physician.

Pharmacologically predictable side-effects of b2-agonist therapy, such as tremor and palpitations, may occur but tend to be transient and reduced with regular therapy. As with other inhalation therapy, paradoxical bronchospasm may occur in very rare cases. The following adverse reactions can be classified

30 Capsules in a bottle