To promote this objective, not only we distribute and market our respiratory range of products globally through our distribution channels but we also undertake ‘contract manufacturing’& ‘formulation development ’of our wide range of generic products such as FLUTIAIR-S 100 which contains Salmeterol Xinafoate BP equivalent to Salmeterol 50 mcg and Fluticasone propionate BP 100 mcg.

This Flutiair-S 100 contains same active ingredients as Advair from GlaxoSmithKline. 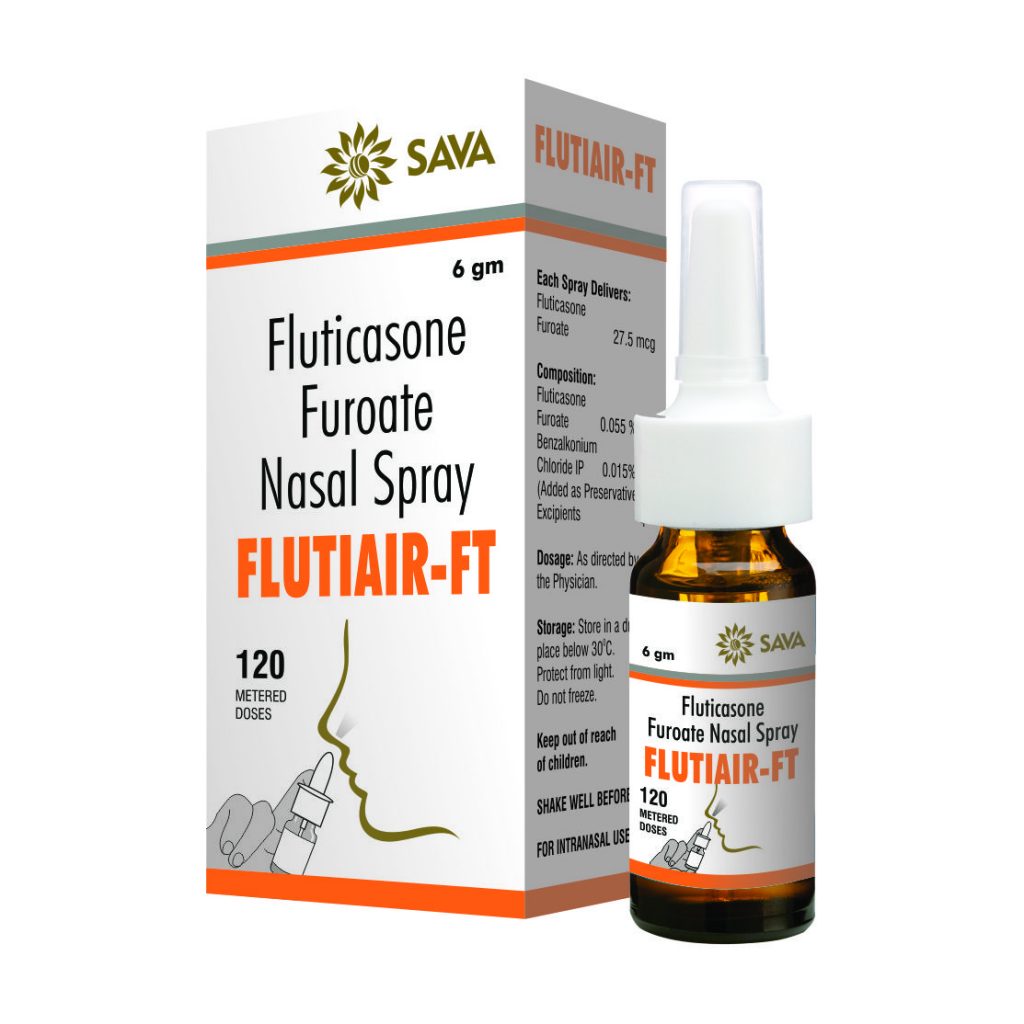 For the use only of a Registered medical practitioner, Hospital or a laboratory

FOR INTRANASAL USE ONLY

Shake well before use.

Fluticasone furoate is a synthetic trifluorinated corticosteroid with potent anti-inflammatory activity. The precise mechanism through which fluticasone furoate affects rhinitis symptoms is not known. Corticosteroids have been shown to have a wide range of actions on multiple cell types (e.g., mast cells, eosinophils, neutrophils, macrophages, lymphocytes) and mediators (e.g., histamine, eicosanoids, leukotrienes, cytokines) involved in inflammation.

Fluticasone furoate has been shown in vitro to exhibit a binding affinity for the human glucocorticoid receptor that is approximately 29.9 times that of dexamethasone and 1.7 times that of fluticasone propionate.

Following intranasal administration of fluticasone furoate, most of the dose is eventually swallowed and undergoes incomplete absorption and extensive first-pass metabolism in the liver and gut, resulting in negligible systemic exposure. The average absolute bioavailability is 0.50%. Oral bioavailability is on average 1.26%, and the majority of the circulating radioactivity is due to inactive metabolites.

Binding of fluticasone furoate to human plasma proteins is greater than 99%.

Fluticasone furoate is cleared from systemic circulation principally by hepatic metabolism via CYP3A4. The principal route of metabolism is hydrolysis of the Sfluoromethyl carbothioate function to form the inactive 17β-carboxylic acid metabolite.

FLUTIAIR-FT (fluticasone furoate) nasal spray is indicated for the treatment of the symptoms of seasonal and perennial allergic rhinitis in patients aged 2 years and older.

The recommended starting dosage is 110 mcg once daily administered as 2 sprays (27.5 mcg/spray) in each nostril. When the maximum benefit has been achieved and symptoms have been controlled, reducing the dosage to 55 mcg (1 spray in each nostril) once daily may be effective in maintaining control of allergic rhinitis symptoms.

FLUTIAIR-FT nasal spray is contraindicated in patients with hypersensitivity to any of its ingredients.

Potent inhibitors of cytochrome P450 3A4 (CYP3A4) may increase exposure to fluticasone furoate.

USE DURING PREGNANCY AND LACTATION

Systemic and local corticosteroid use may result in the following:

Chronic overdosage may result in signs/symptoms of hypercorticism.

There are no data on the effects of acute or chronic overdosage with FLUTIAIR-FT nasal spray because of low systemic bioavailability and an absence of acute drug-related systemic effects.

Fluticasone Furoate Nasal Spray 27.5mcg is supplied in an amber glass vial fitted with a silver metering atomizing pump, transparent nasal adapter, and white dust cover in a box with patient’s instructions for use.

Protect from light. Do not freeze.