To promote this objective, not only we distribute and market our Dermatology  range of products globally through our distribution channels but we also undertake ‘contract manufacturing’& ‘formulation development ’of our wide range of generic products such as Doctaine cream which contains  Lidocaine USP 25 mg &Prilocaine USP 25 mg. 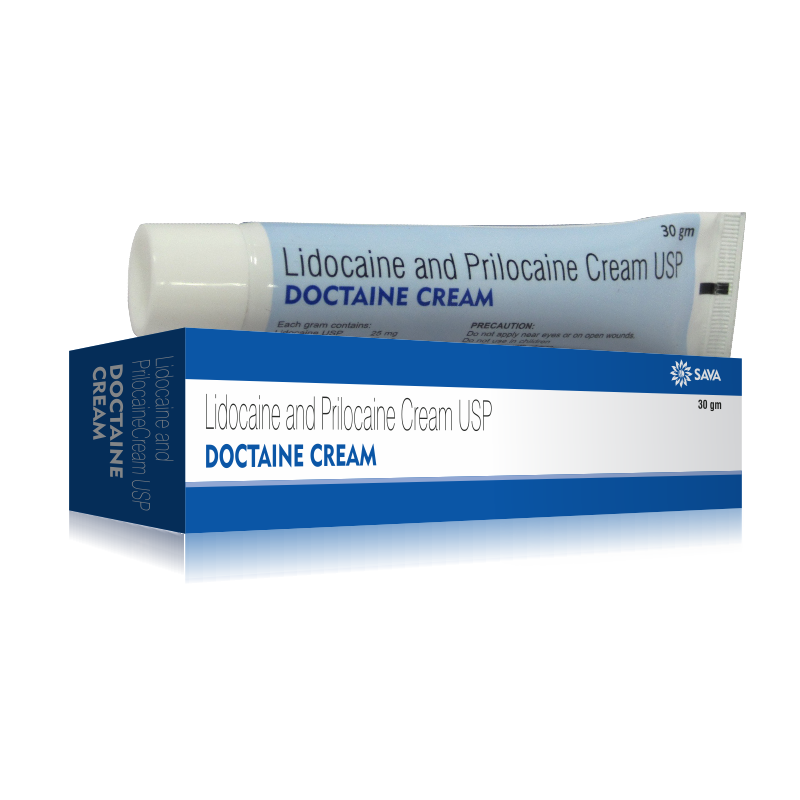 DESCRIPTION: White to off white cream filled in lami tubes.

To provide dermal analgesia for clinical procedures such as split skin graft harvesting, lidocaine and prilocaine cream should be applied under occlusive dressing for at least 2 hours. Satisfactory dermal analgesia is reported to be achieved 1 hour after application, reaches maximum at 2 to 3 hours, and persists for 1 to 2 hours after removal. Absorption from the genital mucosa is more rapid and onset time is shorter (5 to 10 minutes) than after application to intact skin. After a 5 to 10 minute application of lidocaine and prilocaine cream to female genital mucosa, the average duration of effective analgesia to an argon laser stimulus (which produced a sharp, pricking pain) was 15 to 20 minutes (individual variations in the range of 5 to 45 minutes). Dermal application of lidocaine and prilocaine cream may cause a transient, local blanching followed by a transient, local redness or erythema.

It is not known if lidocaine or prilocaine are metabolized in the skin. Lidocaine is metabolized rapidly by the liver to a number of metabolites including monoethylglycinexylidide (MEGX) and glycinexylidide (GX), both of which have pharmacologic activity similar to, but less potent than that of lidocaine. The metabolite, 2, 6-xylidine, has unknown pharmacologic activity.

The elimination half-life of lidocaine from the plasma following IV administration is approximately 65 to 150 minutes. More than 98% of an absorbed dose of lidocaine can be recovered in the urine as metabolites or parent drug. The systemic clearance is 10 to 20 mL/min/kg. The elimination half-life of prilocaine is approximately 10 to 150 minutes. The systemic clearance is 18 to 64 mL/min/kg. During

intravenous studies, the elimination half-life of lidocaine was statistically significantly longer in elderly patients (2.5 hours) than in younger patients (1.5 hours). No studies are available on the intravenous pharmacokinetics of prilocaine in elderly patients. Pediatrics- Some pharmacokinetic (PK) data are available in infants (1 month to <2 years old) and children (2 to <12 years old).

– Genital mucous membranes for superficial minor surgery and as pretreatment for infiltration anaesthesia. Lidocaine and prilocaine cream, 2.5%/2.5% is not recommended in any clinical situation in which penetration or migration beyond the tympanic membrane into the middle ear is possible because of the ototoxic effects observed in animal studies.

Adult Female Patients-Genital Mucous Membranes For minor procedures on the female external genitalia, such as removal of condylomata acuminata, as well as for use as pretreatment for anaesthetic infiltration, apply a thick layer (5-10 grams) of lidocaine and prilocaine cream, for 5 to 10 minutes. Occlusion is not necessary for absorption, but may be helpful to keep the cream in place. Patients should be lying down during the lidocaine and prilocaine cream, application, especially if no occlusion is used.

The procedure or the local anesthetic infiltration should be performed immediately after the removal of lidocaine and prilocaine cream.

Lidocaine and prilocaine cream, is contraindicated in patients with a known history of sensitivity to local anaesthetics of the amide type or to any other component of the product.

Application of lidocaine and prilocaine cream to larger areas or for longer times than those recommended could result in sufficient absorption of lidocaine and prilocaine resulting in serious adverse effects. Patients treated with class III anti-arrhythmic drugs (eg, amiodarone, bretylium, sotalol and dofetilide) should be under close surveillance and ECG monitoring considered, because cardiac effects may be additive.

Studies in laboratory animals (guinea pigs) have shown that lidocaine and prilocaine cream, has an ototoxic effect when instilled into the middle ear.

Methemoglobinemia: Lidocaine and prilocaine cream, 2.5%/2.5% should not be used in those rare patients with congenital or idiopathic methemoglobinemia and in infants under the age of twelve months who are receiving treatment with methemoglobin inducing agents.

There have been reports of significant methemoglobinemia (20-30%) in infants and children following excessive applications of lidocaine and prilocaine cream. These cases involved the use of large doses, larger than recommended areas of application, or infants under the age of 3 months who did not have fully mature enzyme systems. In addition, a few of these cases involved the concomitant administration of methemoglobin-inducing agents. Most patients recovered spontaneously after removal of the cream. Treatment with IV methylene blue may be effective if required. Neonates and infants up to 3 months of age should be monitored for Met-Hb levels before, during, and after the application of lidocaine and prilocaine cream, provided the test results can be obtained quickly.

When lidocaine and prilocaine cream, is used, the patient should be aware that the production of dermal analgesia may be accompanied by the block of all sensations in the treated skin. For this reason, the patient should avoid inadvertent trauma to the treated area by scratching, rubbing, or exposure to extreme hot or cold temperatures until complete sensation has returned. Lidocaine and prilocaine cream, should not be applied near the eyes or on open wounds,

Lidocaine and prilocaine cream, 2.5%/2.5% should be used with caution in patients receiving Class I antiarrhythmic drugs (such as tocainide and mexiletine) since the toxic effects are additive and potentially synergistic.

Prilocaine may contribute to the formation of methemoglobin in patients treated with other drugs known to cause this condition. Should lidocaine and prilocaine cream, 2.5%/2.5% be used concomitantly with other products containing lidocaine and/or prilocaine, cumulative doses from all formulations must be considered.

Carcinogenesis, Mutagenesis, Impairment of Fertility Carcinogenesis- Metabolites of prilocaine have been shown to be carcinogenic in laboratory animals. In the animal studies reported below, doses or blood levels are compared to the Single Dermal Administration (SDA) of 60 g of lidocaine and prilocaine cream, to 400 2 cm for 3 hours to a small person (50 kg). The typical application of lidocaine and prilocaine cream, for one or two treatments for venipuncture sites (2.5 or 5 g) would be 1/24 or 1/12 of that dose in an adult or about the same mg/kg dose in an infant. Chronic oral toxicity studies of ortho-toluidine, a metabolite of 2 prilocaine, in mice (450 to 7200 mg/m ; 60 to 960 times SDA) and rats 2 (900 to 4,800 mg/m ; 60 to 320 times SDA) have shown that orthotoluidine is a carcinogen in both species. The tumors included hepatocarcinomas/adenomas in female mice, multiple occurrences of hemangiosarcomas/hemangiomas in both sexes of mice, sarcomas of multiple organs, transitional-cell carcinomas/papillomas of urinary bladder in both sexes of rats, subcutaneous fibromas/fibrosarcomas and mesotheliomas in male rats, and mammary gland fibroadenomas/adenomas in female rats. The lowest dose tested (450 2 2 mg/m in mice; 900 mg/m in rats, 60 times SDA) was carcinogenic in both species.

Mutagenesis- The mutagenic potential of lidocaine HCl has been studied in the Ames Salmonella/mammalian microsome test and by analysis of structural chromosome aberrations in human lymphocytes in vitro, and by the mouse micronucleus test in vivo. There was no indication in these three tests of any mutagenic effects. Ortho-toluidine, a metabolite of prilocaine, (0.5 mcg/mL) showed positive results in Escherichia coli DNA repair and phage-induction assays. Urine concentrates from rats treated with ortho-toluidine (300 mg/kg orally; 300 times SDA) were mutagenic for Salmonella typhimurium with metabolic activation.

Several other tests on ortho-toluidine, including reverse mutations in five different Salmonella typhimurium strains with or without metabolic activation and with single strand breaks in DNA of V79 Chinese hamster cells, were negative. Impairment of Fertility was reported.

Neither lidocaine nor prilocaine are contraindicated in labor and delivery. Should lidocaine and prilocaine cream, 2.5%/2.5% be used concomitantly with other products containing lidocaine and/or prilocaine, cumulative doses from all formulations must be considered.

Studies have not demonstrated the efficacy of lidocaine and prilocaine cream, for heel lancing in neonates.

Effect to Drive & Use the Machine: None

Allergic Reactions: Allergic and anaphylactoid reactions associated with lidocaine or prilocaine can occur. They are characterized by urticaria, angioedema, bronchospasm and shock. If they occur they should be managed by conventional means. The detection of sensitivity by skin testing is of doubtful value.

Systemic (Dose Related) Reactions: Systemic adverse reactions following appropriate use of lidocaine and prilocaine cream, Systemic adverse effects of lidocaine and/or prilocaine are similar in nature to those observed with other amide local anesthetic agents including CNS excitation and/or depression (light-headedness, nervousness, apprehension, euphoria, confusion, dizziness, drowsiness, tinnitus, blurred or double vision, vomiting, sensations of heat, cold or numbness, twitching, tremors, convulsions, unconsciousness, respiratory depression and arrest). Excitatory CNS reactions may be brief or not occur at all, in which case the first manifestation may be drowsiness merging into unconsciousness.

Cardiovascular manifestations may include bradycardia, hypotension and cardiovascular collapse leading to arrest.

2 Peak blood levels following a 60 g application to 400 cm of intact skin for 3 hours are 0.05 to 0.16 mcg/mL for lidocaine and 0.02 to 0.10 mcg/mL for prilocaine. Toxic levels of lidocaine (>5 mcg/mL) and/or prilocaine (>6 mcg/mL) cause decreases in cardiac output, total peripheral resistance and mean arterial pressure. These changes may be attributable to direct depressant effects of these local anesthetic agents on the cardiovascular system. In the absence of massive topical overdose or oral ingestion, evaluation should include evaluation of other etiologies for the clinical effects or overdosage from other sources of lidocaine, prilocaine or other local Anesthetics.

Keep out of Reach of Children.