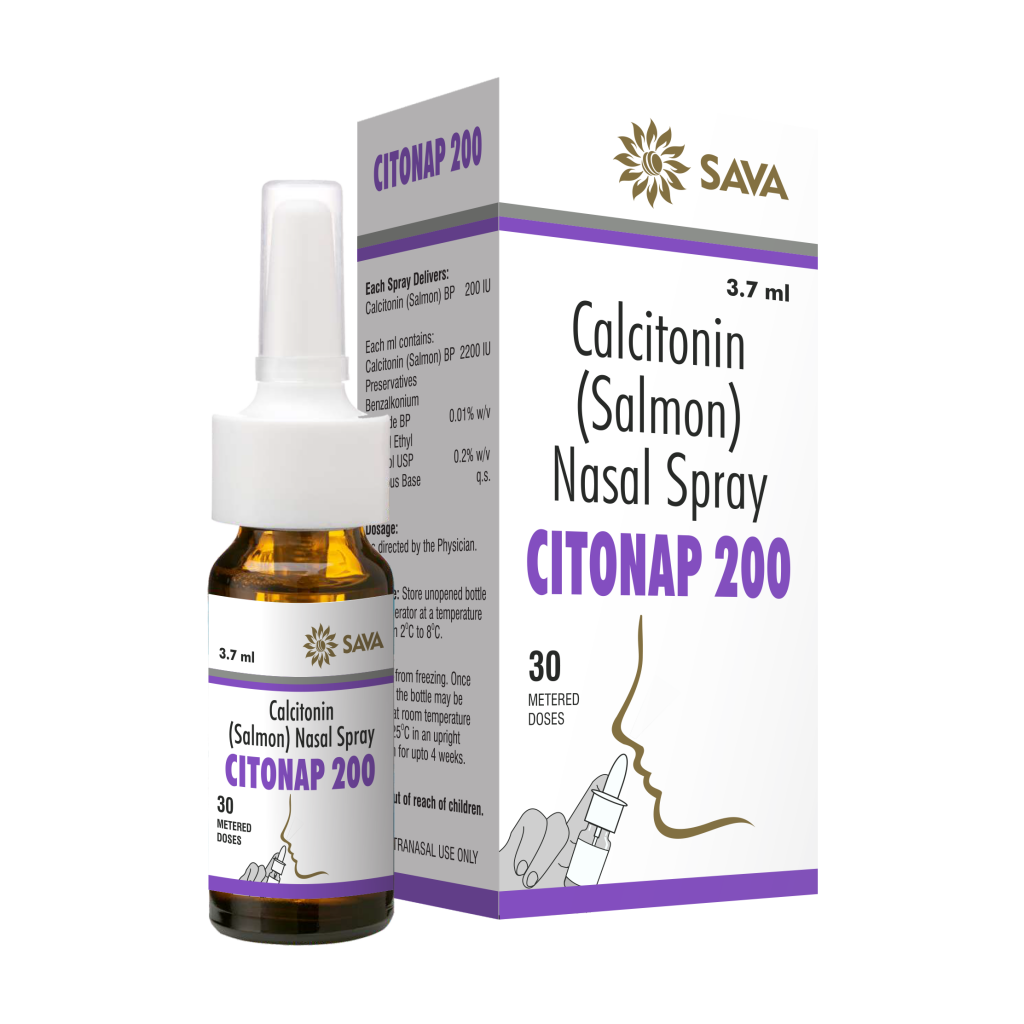 FOR INTRANASAL USE ONLY

Shake gently before use.

Chemistry:
Calcitonin is a polypeptide hormone secreted by the parafollicular cells of the thyroid gland in mammals.
Calcitonin-Salmon Nasal Spray is a synthetic polypeptide of 32 amino acids in the same linear sequence that is found in calcitonin of salmon origin.

Description
Clear colourless liquid filled in transparent glass vials crimped with nasal spray pumps and fitted with an actuator and a cap.

The absence of mineralisation defect with calcitonin has been demonstrated by bone histomorphometric studies both in man and in animals.

In pharmacological studies, calcitonin has been shown to have analgesic activity in animal models. Intranasal calcitonin produces a clinically relevant biological response in humans as shown by an increase in the urinary excretion of calcium, phosphorus, and sodium (by reducing their tubular re-uptake) and a decrease in the urinary excretion of hydroxyproline. Long-term administration of intranasal calcitonin significantly suppresses biochemical markers of bone turnover such as serum C-telopeptides (sCTX) and skeletal isoenzymes of alkaline phosphatase.

Intranasal calcitonin results in a statistically significant 1-2% increase in lumbar spine Bone Mineral Density (BMD), which is evident from year 1 and is sustained for up to 5 years. Hip BMD is preserved.

Pharmacokinetic Actions
The bioavailability of a 200 IU dose relative to parenteral administration is between 2 and 15%. Intranasal calcitonin is absorbed rapidly through the nasal mucosa and peak plasma concentrations are attained within the first hour of administration (median about 10 minutes). The half-life of elimination has been calculated to be around 20 minutes and no evidence of accumulation was observed with multiple dosing. Doses higher than the recommended dose result in higher blood levels (as shown by an increase in AUC) but relative bioavailability does not increase. As is the case with other polypeptide hormones, there is very little value in monitoring plasma levels of salmon calcitonin since these are not directly predictive of the therapeutic response. Hence, calcitonin activity is to be evaluated by using clinical parameters of efficacy.

Indications
Treatment of established post-menopausal osteoporosis in order to reduce the risk of vertebral fractures. A reduction in hip fractures has not been demonstrated.

It is recommended to administer Calcitonin (Salmon) Nasal Spray per actuation to alternating nostrils.

Contra-indications
Hypersensitivity to calcitonin or to any of the excipients of the formulation.

Calcitonin is also contraindicated in patients with hypocalcaemia.

Special warning and Precaution
Nasal examinations are to be performed before treatment begins and in the case of nasal complaints, medication should not be started. If severe ulceration of the nasal mucosa occurs (e.g. penetration below the mucosa or association with heavy bleeding), intranasal calcitonin is to be discontinued. In case of mild ulceration, medication is to be interrupted temporarily untill healing occurs.

Because calcitonin is a peptide, the possibility of systemic allergic reactions exists and allergic-type reactions including isolated cases of anaphylactic shock have been reported in patients receiving intranasal calcitonin. In patients with suspected sensitivity to calcitonin, skin testing is to be considered prior to treatment.

The preservative (Benzalkonium Chloride) can cause swelling of the nasal mucosa, especially during long-term use. If such a reaction (i.e. persistent nasal congestion) is suspected, the use of another dosage form should be considered.

Interactions
Concomitant use of calcitonin and lithium may lead to a reduction in plasma lithium concentrations. The dose of lithium may need to be adjusted.

Effect to Drive and use the machine
No studies exist on the effects of Calcitonin (Salmon) Nasal Spray on the ability to drive and use machines. Calcitonin (Salmon) Nasal Spray may cause fatigue, dizziness and visual disturbances which may impair the patient’s reactions. Patients must therefore be warned that these effects may occur, in which case they should not drive or use machines.

Adverse Reactions
The most frequently observed undesirable effects are local reactions such as rhinitis and nasal discomfort. They are generally mild and rarely require discontinuation of the treatment.

Overdosage
Nausea, vomiting, flushing and dizziness are known to be dose dependent when calcitonin is administered parenterally. Single doses (up to 10,000 IU) of salmon calcitonin have been administered parenterally without adverse effects other than nausea and vomiting and exacerbation of pharmacological effects. Such events might therefore also be expected to occur in association with an overdose of intranasal calcitonin. However, intranasal calcitonin has been administered at up to 1600 IU as a single dose and up to 800 IU per day for three days without causing any serious adverse event. If symptoms of overdose appear, treatment is to be symptomatic.

Storage: Store unopened bottle in refrigerator at a temperature 20C – 80C.
Protect from freezing. Once opened the bottle may be stored at room temperature below 250C in an upright position for upto 4 weeks.

After opening: Should be used within 4 weeks.