To promote this objective, not only we distribute and market our cardiovascular  range of products globally through our distribution channels but we also undertake ‘contract manufacturing’& ‘formulation development ’of our wide range of generic products such as Bio Clopi which contain Clopidogrel (as bisulfate) 75 mg.

This Bio-Clopi contains same active ingrediant as Palvix  from Sanofi. 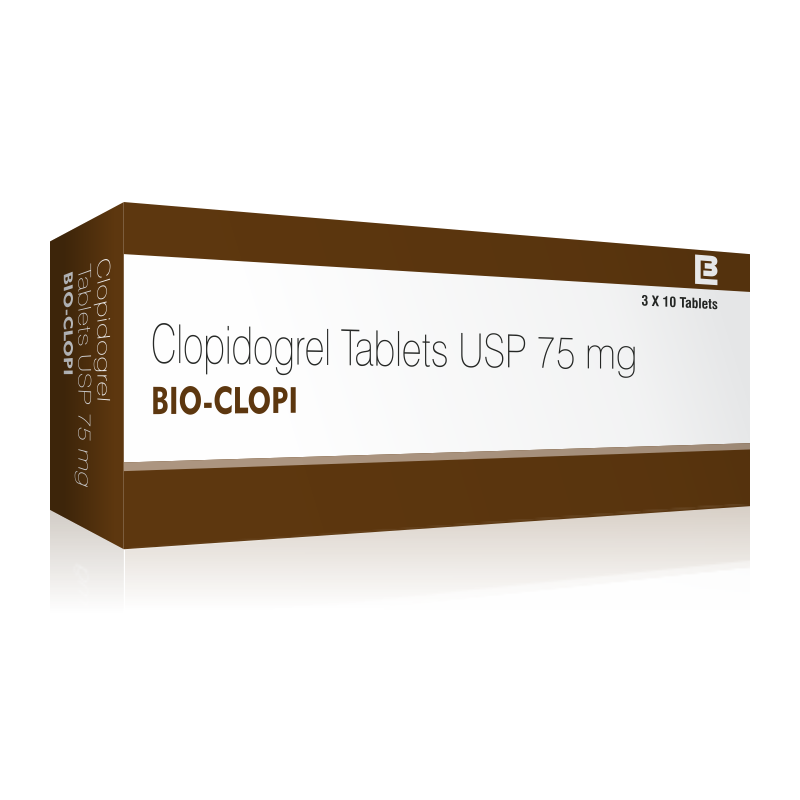 Clopidogrel is an inhibitor of platelet activation and aggregation through the irreversible binding of its active metabolite to the P2Y12 class of ADP receptors on platelets. The active metabolite of clopidogrel selectively inhibits the binding of adenosine diphosphate (ADP) to its platelet P2Y12 receptor and the subsequent ADP-mediated activation of the glycoprotein GPIIb/IIIa complex, thereby inhibiting platelet aggregation. This action is irreversible.

Prevention of Athero-thrombotic events in

Prevention of Athero-Thrombotic and Thrombo-Embolic events in Atrial Fibrillation

Bio-Clopi should be given as a single daily dose of 75 mg.

Non-ST segment elevation acute coronary syndrome (unstable angina or non-Q-wave myocardial infarction): Clopidogrel treatment should be initiated with a single 300-mg loading dose and then continued at 75 mg once a day (with acetylsalicylic acid (ASA) 75 mg-325 mg daily). Since higher doses of ASA were associated with higher bleeding risk it is recommended that the dose of ASA should not be higher than 100 mg. The optimal duration of treatment has not been formally established. Clinical trial data support use up to 12 months, and the maximum benefit was seen at 3 months.

ST segment elevation acute myocardial infarction: Clopidogrel should be given as a single daily dose of 75 mg initiated with a 300-mg loading dose in combination with ASA and with or without thrombolytics. For patients over 75 years of age Clopidogrel should be initiated without a loading dose. Combined therapy should be started as early as possible after symptoms start and continued for at least four weeks. The benefit of the combination of Clopidogrel with ASA beyond four weeks has not been studied in this setting.

In patients with atrial fibrillation:

be initiated and continued in combination with Clopidogrel.